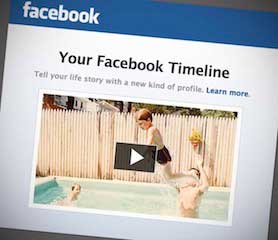 Have you noticed the ads in newspapers, magazines, on television and even on actual product packaging, where instead of companies listing their own web site, they say “Find us on Facebook”? It’s almost universal at this point, it seems. There’s a trend in marketing that puts all the Internet marketing eggs into the Facebook basket, and if you’re doing that, I’m here to tell you that you’re making a big mistake.

“Practically every day I read about someone who is leaving Facebook, but almost never do they say they’re leaving the Internet. […] Do not miss that important distinction.”

I get it. Facebook has a lot of eyeballs, and eyeballs equal traffic, and possibly money. But these are people who spend obscene amounts of time playing Farmville and nosing through everyone else’s lives. And that’s another point. On Facebook, your message gets lost in the noise. People don’t go to Facebook to read your message. They go to send instant messages to their friends, look at photos, see who’s taking a dump, who’s on vacation, and who’s bragging about that shiny new car they just bought. It is not a good use of your marketing dollars, or your time, to advertise your primary online presence as a third-party destination where your message gets lost in the noise and where you don’t have total control of the content.

“It may not seem like it sometimes, but people go to web sites other than Facebook, and yours should be one of them.”

Advertise your own property. Your own dot com. You own it. You control the content. You control the design. On your web site, your competitors’ ads aren’t displayed next to your message. If you send someone to your Facebook page, and Facebook displays a half-naked chick next to your company’s message, what do you think they’ll be thinking? Let me tell you, because I’ve run into this scenario several times already. They’ll think YOU put that half-naked chick there, and they may very well be offended. At best, they’ll know you had no control over it, but the half-naked chick is still there. How much positive impact did she have on your business? None.

Don’t get me wrong. I’m not saying ditch Facebook. Just don’t make it your primary online marketing destination. Instead, use Facebook’s developer platform to connect with your customers. Allow your customers to comment on your site with Facebook Comments, if you want. Allow them to share your web site content with their Facebook friends. Live stream your Facebook feed into your site somewhere, if it makes sense. Use Facebook to drive traffic to your site and increase engagement. There are many ways to use Facebook, just don’t advertise it as your primary online marketing destination.

Facebook is a fad. People don’t believe that right now, but it’s true. In a few years, we’ll look back and laugh at how “important” it was. It’ll still be around, but it won’t be the same. Practically every day I read about someone who is leaving Facebook, but almost never do they say they’re leaving the Internet. Facebook is a fad. The Internet is not. Do not miss that important distinction.

What’s not a fad, and what won’t be gone, is your own dot com presence. Make your primary online marketing destination the one that you own and have total control over. Build customer loyalty around your own web site, and put most of your Internet marketing eggs there, so that when the Facebook fad is over, you haven’t lost all your eggs.

Look, web sites are cheap these days. A basic site can be built with a cheap template for less than $100, and the site can be hosted for less than $10/month. If you need something more elaborate, you can get an entire site built for less than a couple thousand. The point is, there’s no excuse for not having a good web site that you control.

You go through the painstaking process of grooming your company’s image – the logo, the slogan, the advertising materials, the look and feel of your business, etc. etc. etc. Why wouldn’t you use the same mindset when doing your online marketing? Facebook is a fad and it’s sloppy and uncontrollable, and because of that, Facebook should only be a supplement to your online marketing, not the primary method you use to reach your customers online. It may not seem like it sometimes, but people go to web sites other than Facebook, and yours should be one of them.

3 thoughts on “Facebook is a fad, but the Internet is not”